A studio shout-out is needed:

I recently visited Kansas City, MO, for a convention and found myself within walking distance of Maya Yoga - an Ashtanga studio in the Arts district of downtown Kansas City.

I admit, I was a little (a lot?) nervous about trying an Ashtanga Studio, not because of the sequence, but because I have had a bad experience at a different Ashtanga studio whose name I shall not mention.  This other studio was elitist, cliquish, and just unwelcoming.  If you weren't practicing The Primary series in an absolutely traditional fashion, well...go somewhere else.

Maya Yoga was 180* different.  I was welcomed at the front desk, and when I explained I was just visiting for the week, I was shown the option of a two week trial period of three classes, which was a really good deal!  I appreciate being offered that rather than just being shoved into the pay-as-I go option.

The studio was warm, brightly light, and inviting.  The other students made eye contact and said "hello", which is nice when in a strange place.  The students talked, joked, and caught up with each other, which *I* like to see because that tells me a community is being developed.  The instructor took a moment to ask if I knew the sequence, explained he added a couple poses, and welcomed me.  Again - nice!

And I was SO impressed by the class!  Led by John Moran (according to the schedule), he made the Primary series enjoyable and approachable.  He offered alternate places to work while challenging the more advanced practitioners.  Something I really appreciate in a class.   His cuing was solid, flowed, and had a good cadence.   I was ecstatic.  I haven't enjoyed the primary series like that in years.

Next class I took as a Noon class:  Ashtanga "Power Hour", led by Kim Johnson.  This combined part of the Primary series standing sequence with the first handful of poses from the secondary series.  Awesome!  One of those, why haven't I done this?!   Again, the instructor had great cuing, and offered a variety of places for people to work.

Last class (sadly), was Led Primary Series by Lainie Pasquini.  Room got a bit warmish, probably hit 90* and very humid (not much unlike a Corepower class), and I thought it cool that the instructor did open some windows to blow out some of that stuffy humidity.   This instructor reminded me a bit of myself.  Very enjoyable session and I was sad it was my last.


So, if you EVER find yourself in Kansas City, TRY THIS STUDIO.   I see why they've earned the recognition they have posted: 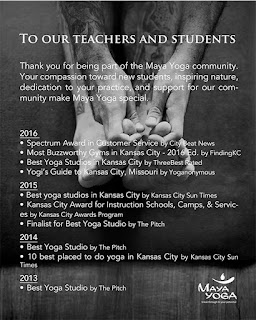 Hi Kristin,
Thank you for taking time to write about Maya Yoga. I greatly treasure your comments and insights. It is heartwarming to know that we touched you in a special way. We love Ashtanga and enjoy sharing the practice with others. I know the teachers at Maya Yoga will appreciate your comments. With your permission, I would like to post your story in our student stories section.

Thank you for reading! Please feel free to share elsewhere, Maya's instructors are really to be commended.

I am watching to see what workshops you may offer in 2017 - if circumstances work out, I would love to return! 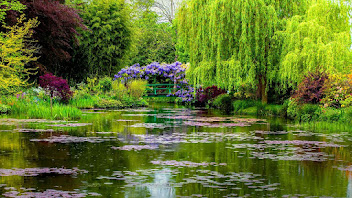 I seem to have accidentally blown out some pictures and links. Please be patient while I put things back together again.

I'm Kristin, a student/practitioner and instructor in Ashtanga, Vinyasa Flow, Hatha, and Restorative Yoga . My inspiration and instruction has come from many people: All the students who've passed through my classes, Ann Maxwell, Molly McManus, David Swenson, Doug Swenson, Matthew Sweeney, Tanya Soward and the many wonderful people and studio's I have practiced with and in.

I like the concept of having a place to discuss more than just the asana in class. There is a whole world of yoga available that we don't often get to in our classes.

So please feel free to add your comments and thoughts as we all travel on this yogic path together, even if it's just for a little while.

You can also visit me here: Scifi with a Dash of Paprika.